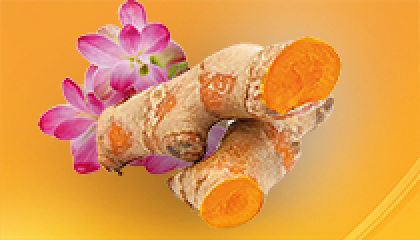 Originally found in the tropics and subtropics, ginger (Zingiber officinale) [...]

Curcuma (Curcuma longa L.) is related to ginger. Both of these plants belong to the ginger family, Zingiberaceae. Curcuma is sometimes referred to by its botanical name, turmeric. It is presumed that the plant originates from India, but it is now distributed throughout the entire tropical and subtropical regions of Southeast Asia, where it is an integral part of the local cuisine. The root tubers, which have a savoury, earthy flavour, are added to meat, rice, vegetables, salads and sweet dishes.

After harvesting, curcuma is usually boiled immediately and dried and powdered afterwards, because its characteristic bright golden colour only develops when it is exposed to heat. Its potent colouring capability also makes the plant very popular as a dye for foods and more. (When working with curcuma, it is therefore important to prevent any contact with clothing and any other objects that are likely to become discoloured.)

The yellow components of curcuma are called curcuminoids and their main ingredient as curcumin. These components count among the secondary plant substances (SPS), for which curcuma has been exceptionally highly valued in Ayurvedic medicine and other holistic medicinal concepts since very early times. In traditional forms of medicine, the uses of curcuma for soothing and healing are just as versatile as its uses as a culinary spice.

Since the 20th Century, this “botanical gold” has been researched very intensively in conventional medicine, too. (By the end of 2018, over 11,000 scientific papers had already been published!). Studies confirmed numerous effects previously that had already been described in traditional herbal medicine, although this was mostly confined to experimental laboratory tests. Therefore, it will still be some time before the active agents found in curcuma are available in the form of approved drugs, not least because the potential range of areas of application is very extensive.

Aside from curcumin, research is currently being conducted on other bioactive components, including essential oils, and on the effect of properties that may enhance curcuma’s effectiveness. The researchers were particularly impressed by the fact that curcuma proved to be nontoxic and practically free of side effects, even when administered in high daily doses. (However, people with impaired gall production or gallstones and patients who take anticoagulants should not take curcuma in high doses.)

Golden Milk or Curcuma Latte is the trendy drink of the moment. It is particularly good for digestion and it is purported to support the immune system. This drink is made from curcuma paste that is stirred into milk or a plant-based milk substitute (e.g. oat milk or almond milk), and rounded off with a few drops of oil and freshly ground pepper. You can simply use Curcuma Drops in place of the curcuma paste! Enjoy and feel better.