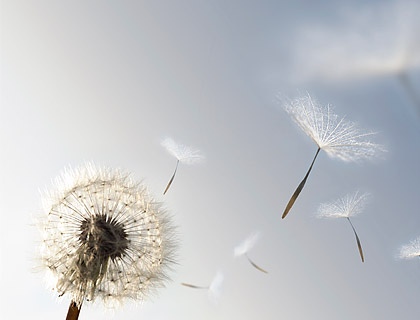 The gold of the Egyptians

Black cumin has been a precious spice and a valued remedy at all times and everywhere [...]

Black cumin has been a precious spice and a valued remedy at all times and everywhere on earth. Whether in ancient Greece, among the Romans, in European herbal books of the Middle Ages or in ancient Egypt –there are references to the health-promoting powers of this plant everywhere.

In the Arab world, black cumin is used as a medicine, as a cosmetic and as a delicious, healthy spice for refining meals. But even in Germany, black cumin is very popular because of its taste. It is not only used as a tonic, but also is a remedy for troubles that affect many people: allergies.

Especially in spring, millions of people suffer the same fate: along with the pollen comes sneezing, scratchy throat, red and burning eyes and fatigued limbs. But it is not the pollen itself that causes the tingling in the nose, but the proteins contained in the small grains. And these can be found almost anywhere: in foods such as nuts, biscuits and cakes, house dust, animal hair, skin and hair care products and cleaning agents,... Experts estimate that one in three people in Germany is now allergic to such proteins. Nothing about these substances is dangerous, but the immune system of allergy sufferers does not know that. It has the task of rendering dangerous pathogens and foreign bodies harmless. With those who suffer from allergies it responds to some harmless proteins as if these substances were dangerous foreign substances which must be eliminated without fail. As a result, special cells increasingly release histamine that triggers inflammation. This tissue hormone is responsible for the typical symptoms of an allergy.

Fortunately, allergic persons are not helplessly exposed to the whims of their immune system. In addition to conventional medicines, which have an anti-allergic effect, but, however, frequently only suppress the symptoms, there is support from nature: with black cumin it is possible to calm down an out of balance immune system without side effects. The anti-allergic effect of pure, virgin Egyptian black cumin (Latin: Nigella sativa) is well-established through numerous scientific studies. It is important that the oil is cold pressed and has been stabilised in a gentle way in order to preserve its valuable contents. Consumption should already have begun weeks before the first pollen arrives.