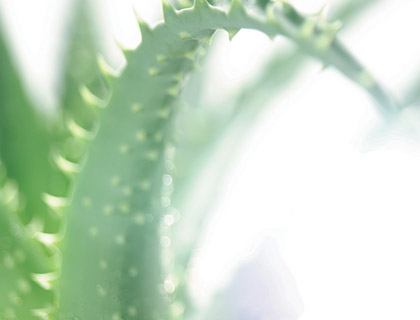 The beauty vitamin for hair and nails

There is an unusual variety of powers in the gel of the leaves of aloe vera. Some 160 plant ingredients have many positive, pleasant, useful and beneficial effects on the skin and body. The "queen of herbs", also known as Aloe vera, contains, among other things, important vitamins, minerals, trace minerals, bioflavonoids, amino acids, enzymes, salicylic acid and a sugar molecule with particular immune-strengthening properties. Around the globe and across cultures, the juice of aloe vera has been used for thousands of years for strengthening and healing.

Already 6000 years ago, aloe vera was considered to be the plant with the greatest healing powers and a symbol of immortality in China. Scientific studies have now confirmed the effectiveness of aloe vera, which has been known for millennia.

The interaction of the plant substances permits a tremendous range of applications. The ingredient acemannan supports the immune system by helping to activate the defence of our body against pathogens through activating certain cells and antibodies. By the strengthening of the intestine, which is the largest immune system organ, aloe vera works from within, for instance against viruses and bacteria, yeast fungi and parasites. The body's defences are mobilised, free radicals are intercepted by the antioxidative effect of flavonoids and cellular ageing is slowed down. In addition, aloe vera lowers blood glucose levels in diabetics – already after two weeks. Used externally, this plant causes a more active supply of nutrients to the skin and stimulates cell growth. It has a healing effect on minor wounds and injuries, and a cooling and soothing effect on mild burns and insect bites. The gel of the leaves relieves symptoms of neurodermatitis, psoriasis, acne and eczema.

The cosmetic use of aloe vera has a long tradition. According to legend, Nefertiti and Cleopatra used the pure gel of the plant every day or together with oil.

Natural cosmetic products from aloe vera are absolute moisturising miracles. The skin is protected, lifted and cleaned. It is therefore particularly suitable for dry and sensitive skin and extraordinary strain – for example, during seaside or mountainside holidays.