How it all began

When the Parson Josef Hurst and the pharmacist Dr. Eduard Hiepe - from the idyllic village of Häg in the valley Wiesental in the southern Black Forest - began producing the original TANNENBLUT in the early 1920s, it is unlikely that either of them realised that this would become the basis for today's HÜBNER Original Black Forest TANNENBLUT.

Back then "TANNENBLUT" was developed out of care and responsibility for the health of the textile workers in the Black Forest, who had to inhale unhealthy cotton dust each day during their work for the textile industry. This often led to bronchial illnesses, and so Eduard Hiepe and Josef Hurst sought to develop an affordable and easily absorbed remedy for the airways. 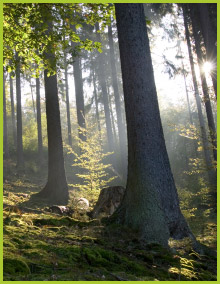 Parson Hurst found a medicinal plant recipe in a herbal book by his famous counterpart Parson Kneipp; his teachings were based on a holistic system of natural medicine. He developed this recipe with Dr. Eduard Hiepe and together they strengthened their pharmaceutical knowledge. They broadened the recipe to include special Black Forest medicinal herbs in order to create a high-quality natural medicine with real forest honey - "Parson Hurst's Tannenbalsam". Soon this product was doing more than just soothing the pains of the many inhabitants of the Wiesental parish from which Parson Hurst originated; after a short while, it had spread beyond the parish's "borders" - word of its healing power spread like wild fire.The birth hour of the ANTON HÜBNER company's original product had come!